The W. G. Goetz & Sons Fly Press in the photos below is believed to have been owned by what was the Bendigo Ordnance Factory and later, Hofmann Engineering.

The Bendigo Ordnance Factory began in 1942 to produce heavy artillery and naval guns. Around May 1989, Australian Defense Industries was created as a government-owned corporation, which took over the operations of major Australian government owned defense facilities including those at Bendigo.

As part of the plan to eventually privatise the industry, around 1999-2001 the Australian government enacted plans to sell ADI. The successful bid was that of the joint venture between Transfield and French group Thomson-CSF.

By 2006, Thales increased what was its 50% share in ADI to full ownership. ADI became Thales Australia.

During 2010, Hofmann Engineering, who it seems had the Fly Press shown here, acquired 5 hectares of the Bendigo site from Thales Australia, including workshops.

Thanks to Michael for the photos. Click on an image below for a larger version 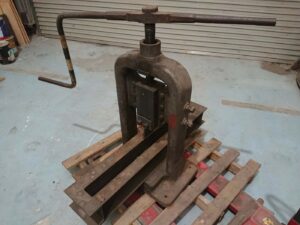 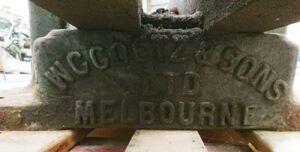