Contents hide
1 Company sold – to the wrong buyer, as it turned out
2 ‘Loans’ from Goetz to Northam companies
3 Plant and equipment auctions, April 1999
4 A ‘slap on the wrist’ for a dodgy director
5 Can a leopard change its spots?
6 Receivers and Administrators
7 Administrators Report to Creditors, 12 October 1999
8 Attempted sale and auction, 13 October 1999
9 Plant and equipment auction, 2nd & 3rd December 1999
10 Finalization

Company sold – to the wrong buyer, as it turned out

On 15th June 1998, approximately three quarters of the issued capital of W.G. Goetz and Sons was purchased from major shareholders by a Mr. Charles Northam for $298,639, through Tundalla P/L, a private company he controlled.

A big problem was that Northam had used money from Goetz and Sons to aid Tundalla to purchase the Goetz issued capital.

It only took 15 months from the time Northam took control of Goetz until external Administrators were appointed; the company was eventually placed into liquidation on the 13th October 1999.

ASIC alleged that Mr. Northam was in financial difficulty at the time his company purchased the Goetz shares. He was declared bankrupt on 12 November 1999 and set before the Melbourne County Court, prosecuted by the Commonwealth Director of Public Prosecutions, where he pleaded guilty and was convicted of giving his company financial assistance to purchase the shares in WG Goetz that enabled him to gain control of the company.

He also admitted to the court that he had prior convictions for the non-payment of various taxes for companies that he previously directed, and that he had been the director of a number of failed companies.

The above is a summary of an ASIC Media release “02/172 Former Melbourne director sentenced”, dated 15 May 2002. Release 02/172 has been withdrawn and is no longer available on ASIC’s web site.

‘Loans’ from Goetz to Northam companies

In a letter dated 12 February 1999 by a previous director (name withheld) to Preference Shareholders, he alleged that a loan of $378,027 to Tundalla had not been approved by shareholders, and described Tundalla as a company “whose major asset was said to be its shareholding in W. G. Goetz and Sons Limited.”

Additionally in the letter, he states that another company of Northam’s, Rogers Bros. (Manufacturing) P/L, had been loaned $170,000 by Goetz and that the Rogers Bros. loan was not recoverable and had been written off.

According to the newspaper article (see below), through Tundalla, Northam  paid for the Goetz shares with five cheques totalling $298,639 from Esanda Finance, using plant and equipment owned by Goetz as security. It seems that the exact amount Northam paid for Goetz varies, depending on which source you read. What is clear though is that the way he did it was dodgy, to say the least… the Administrators seemed to think so.

The Administrators (see below) would later state that the Esanda security was at risk in that a portion of the funds being used for Goetz & Sons to finance the purchase of its own shares may have contravened Section 205 of the Corporations Law. Later investigations by the Administrators revealed that Northam had signed the Esanda security documents on behalf of W. G. Goetz & Sons and that he had affixed the company seal to the documents on 12th June 1998, prior to actually becoming a director and secretary of Goetz and Sons – he was not elected until 15th June.

In an October 1999 Report to Creditors, Administrators reveal that unsecured loans advanced between June 1998 and April 1999 to Tundalla and Rogers Bros. amounted to $491,497.25 and $664,217.57 respectively. Tundalla was placed into liquidation by order of the Supreme Court of Victoria on 1st September 1999; the court had ordered the liquidation of Rogers Bros. on 17th December 1998. The winding up petitions were unrelated with Goetz & Sons loans.

Before the Receivers and Administrators got involved, a plant and equipment sell off was held to raise finance by way of a 3-day auction at the Hall Street works from Tuesday April 20th – Thursday April 22nd. 1999

Below: A3 auction flyer, inside and outside. Click images for larger views. 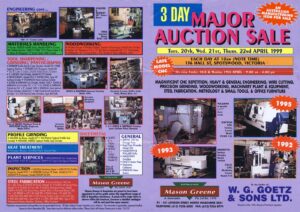 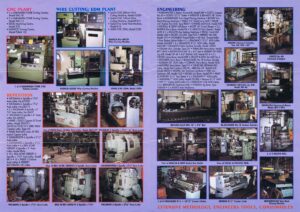 Below: A5 size Lot brochures from the 3 days of auction.
Click image for larger view 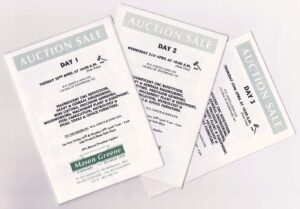 A ‘slap on the wrist’ for a dodgy director

Mr. Northam received what many would regard as a ‘slap on the wrist’ for his ruinous dodgy dealings with Goetz, in that he was sentenced on 15th May 2002 to “six months jail, to be released immediately on his entering into a recognisance in the sum of $500 to be of good behaviour for a period of two years”. ASIC media release 02/172

Can a leopard change its spots?

It seems that Mr. Northam did not learn his lesson from his Goetz related conviction and apparently continued on with his dodgy practices, allegedly ruining RFI Industries, an electrical company which he and his wife purchased in 2001. According to this Linkedin entry about RFI, the company knowingly traded insolvent from 2007 and was liquidated in 2010, which saw Northam in court again where he “pleaded guilty in the Ringwood Magistrates Court to one charge of making, or participating in the making of, decisions affecting a corporation (RFI Industries) whilst disqualified, following an investigation by (ASIC).” RFI Industires, LinkedIn

Below: A newspaper article gives a summary of the ruin of what was a great family firm at the hand of Charles Northam. This also included insufficient superannuation contributions for employees. Sunday Herald Sun, August 25th 2002, p.81. Click image for larger view. 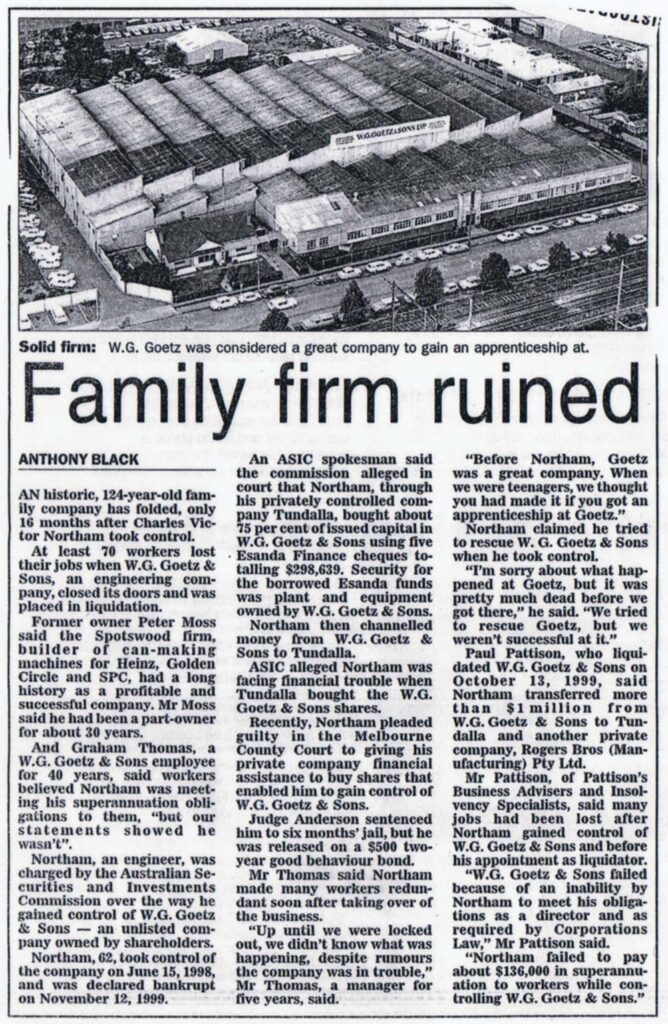 On 4th August1999 W. G. Goetz & Sons had engaged Ernst & Young Corporate Finance P/L to sell the business, but this did not eventuate as financial information to be supplied by Charles Northam in order to commence a selling program was never provided.

On the 27th  August, Esanda Finance appointed Receivers of the company’s plant and equipment and Esanda also entered into possession of the Hall Street premises.

The action taken by the Esanda Receivers resulted in the cessation of all Goetz business and the standing down of all employees other than a small number of administration personnel. The administrative staff were housed in rented offices located next door to the Goetz premises. No company access was permitted to the premises, plant or equipment (other than removal of personal items) after Charles Northam had exhausted refinancing options and Administrators Kenneth J Stout and Michael Scales were appointed on 23rd September 1999. 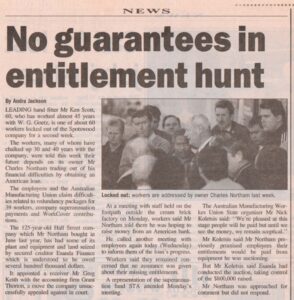 Below: For a brief moment it seemed there might be a reprieve for the workers’ jobs, but going by the handwritten comment in the margin of this newspaper clipping, it seems that not everyone shared the optimism! ‘The Mail’, 22 September 1999. Click image for larger view. 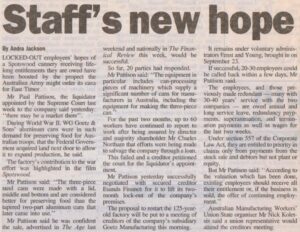 Below: Some staff had been put back on and the liquidator was confident the business would be sold by Christmas… but it was not to be. ‘The Mail’, no date. Click image for larger view.

The report goes on to say that Charles Northam had bought Goetz with the intention to modernise the company by overhauling labour costs through a major redundancy program, divesting the company of surplus and uneconomical equipment and further concentrating the business on developing new products. In the newspaper article (see above), it is reported that Northam claimed that he tried to rescue W. G. Goetz when he took control, saying that it was “pretty much dead before we got there”. It is doubtful that any of the former employees shared his viewpoint.

The Administrators were of the opinion that Goetz may have traded while insolvent, that the company had suffered from liquidity problems, and that their financial position was exacerbated by Northam’s loans to his other companies Tundalla and Rogers Bros.

It was also revealed in the report that several vehicles leased by the company had not been included in the Goetz plant and equipment register and were being used by related parties of Northam, who had indicated that he wished to purchase the vehicles. However, the Administrators had written to Northam demanding the immediate return of the vehicles, noting that action may be taken against the related parties should the vehicles not be returned in the short term.

The Administrators estimated that employee entitlements amounted to $587,229 including redundancy and notice payments. There were also around 130 unsecured creditors, collectively owed approximately $784,590.

The report floated possible courses of action available to creditors, including a recommendation of either attempting to sell the company or parts thereof, as a going concern, but if that should not succeed, that the company should be placed into liquidation and that all fixed assets should be sold at public auction. As noted above, a previous attempt to put the company up for sale went nowhere due to Northam failing to provide necessary financial information to Ernst & Young Corporate Finance P/L, who had been engaged to sell the business.

The Administrator’s opinion was that the company was in fact insolvent and that it did not have sufficient assets to meet creditors claims, and concluded the report by recommending that the company should be placed in liquidation and wound up.

The company was liquidated the next day, October 13th 1999. 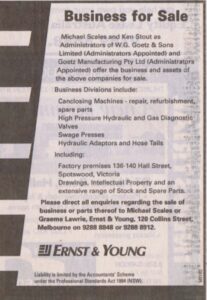 Above and below: These advertisements appeared in The Age on 9th October 1999. The plant and equipment auction ordered by the Receivers for 13th October 1999 was advertised as being ‘postponed’, following a proposal by the Administrators in order to give them time to attempt to sell the business (as an alternative means to realise the assets). However, despite the advertising, Esanda did not agree to the proposal and the auction went ahead as planned on October 13th. 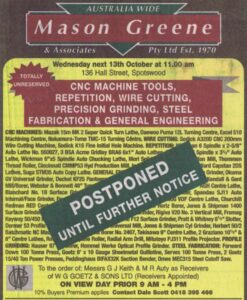 Below: Outside and inside of the A5 auction flyer, 13th October 1999. Click images for larger view 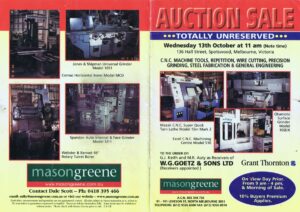 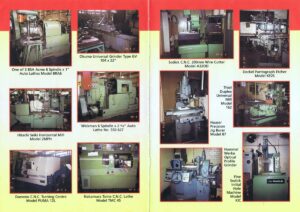 This was the third auction, and second ordered by the Receivers.
Click image of Lot brochure for larger view. 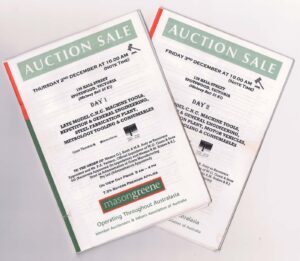 Below: Late January / early February saw the sale of Goetz Manufacturing’s hydraulic microcheck business, but at the date of this newspaper article, sale of the rest of the Goetz business was still being sought. (Goetz Manufacturing P/L was placed into liquidation on 28 June 2000 and had its ABN cancelled on 31 March 2003.) ‘The Mail’, 9 February 2000. Click image of Lot brochure for larger view. 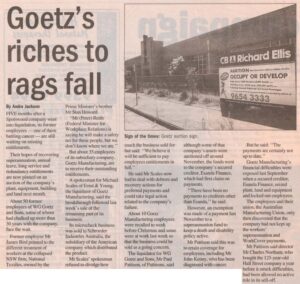 Another report from Pattisons Business Advisors & Insolvency Specialists to creditors dated 28th June 2004 stated that all assets of W. G. Goetz & Sons Limited (In Liquidation) had been realised with receipts totalling $1,804,357.16 less payments of $1,804.048.63, leaving cash at bank of $308.53. The remaining cash was to be applied to Liquidators disbursements and bank fees.

The report noted that Mr. Charles Northam had been prosecuted by ASIC and that “The secured creditors namely Bank West and Esanda Finance have been repaid in full from the sale of the factory and Plant & Equipment respectively.”

Regarding employees as priority creditors in the liquidation, the report advised that employee entitlements had “been paid approximately 91 cents  in the dollar out of their total claims of $862,806.44.”, but noted that as there were no further assets to be realised, there would not be further dividends paid to employees or unsecured creditors.

The report also mentioned that the Liquidators of the related entity of Goetz Manufacturing Pty. Ltd. had finalised their administration and the company had been deregistered.