The 1975 Centennary brochure notes 1875 for the commencement of Goetz Engineering in Queen Street Melbourne. However, no evidence supporting this start date at that location or elsewhere has been found. On the contrary, evidence for a later date is found in the Sands & McDougall’s Melbourne Directory listings when the Goetz name first appears in 1880 in partnership with an engineer and machinist by the name of Gustav Müller, although there is evidence of a partnership between the two from September 1878 (see below re. Müller’s insolvency).

There is no evidence for the official 1875 commencement year at 140 Queen Street or elsewhere. During 1875/76, the address 140 Queen Street (east side, between Lonsdale & Little Lonsdale Streets) was occupied by one ‘William Scott, Contractor’.

Previously, in the 1869 photograph by John Noone (see below), the building was occupied by Colonial Wines.

In 1877 the address was listed as ‘vacant’. If Goetz was operating a business at this time, it was unlikely at this address. So far no evidence has come to light regarding his business activities until 1878. All that is known is that he was living in Maribrynong when he married Sarah Williams on July 1st 1876.

In the last quarter of 1888, the city council decided to renumber Melbourne’s streets and by January 1889 the newly published Melbourne Directory included the new numbering system. Some businesses advertised both their new street number along with the old number for some time.

On December 22nd 1884, Crown Allotment Lot 1, Section 29, which included number 140 Queen Street (old street numbers), was offered for auction. The Argus newspaper advertisement noted that No. 140 was occupied by ‘W. Goetz as an iron-safe maker’s establishment’. It is not known if the property sold or not, but Goetz was still listed at 140 Queen Street for a few more years. 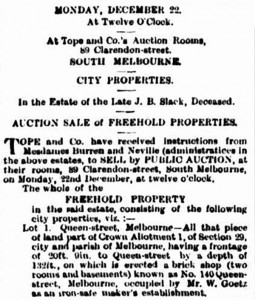 The description of the auction advertisement above locates Lot 1, Section 29, Parish of Melbourne on the north-east corner of Queen and Lonsdale Streets. The map below shows it occupying half the distance along Queen Street between Lonsdale and Little Lonsdale Streets (nowadays 248-262 Queen Street). From the description in the advertisement, it appears that the whole of the allotment was known as number 140 Queen Street. However, the Sands & McDougall’s listings (see further below) suggest that 140 (renumbered as 260) only occupied a small frontage in Queen St; nowadays somewhere between the buildings at 256-262 (there is currently no building numbered 260). 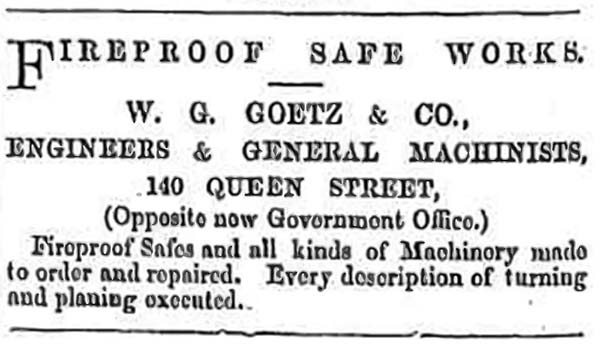 Above: Advertisement from The Jewish Herald, 5th Nov. 1880 p.10.
The ‘new Government office’ mentioned was the Office of Titles.

Below: A letter to the editor of The Age, 7 May 1880, arguing against ‘the deterioration of the Government to favor foreign manufacturers at the expense of our own people’, giving the example of W. G. Goetz of 140 Queen Street losing a tender to supply fireproof safes to the government. Click image below for larger view. 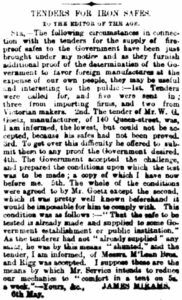 Below: Two years after 140 Queen Street had been renumbered as 260, an advert for a Goetz invention for compressing blasting powder into cartridges. The Age, 11 January 1890

Below: Whilst at Queen Street, W. G. Goetz invented a machine for compression of blasting material into cartridges (see advert above). The Illustrated Australian News (Melb), 5 August 1885, p.115 Click image below for larger view. 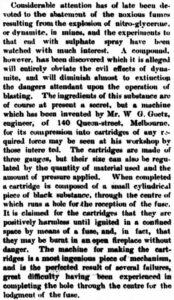 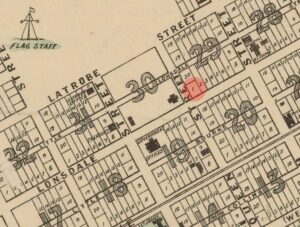 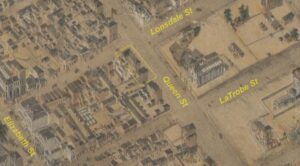 Below: Detail view of above image. Lot 1 probably does not include the light coloured building in the middle or the other buildings on the left, but only the buildings fronting Queen Street. 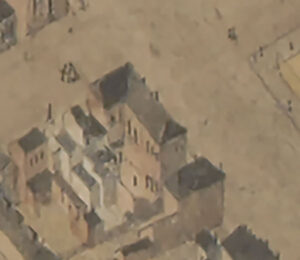 Below: 140 (nowadays 260) Queen Street in 1869 (second building from left). Portion of John Noone photo ‘Looking east along Lonsdale St. from Queen St.’ SLV H2578 Muller occupied the building from 1878; Goetz is officially listed with Muller in 1880. Goetz’s business whereabouts prior to 1878 are unknown. In this 1869 photo, 140 Queen Street is occupied by Colonial Wines.

Below: 2018/19 Google Street View of 248-262 Queen Street. Following the street renumbering in 1888, in the 1889 Sands & McDougall’s Directory, Goetz is listed at 260 Queen Street (between 256-262 in the photo below). Finlay Alley, clearly visible to the left of the Rigby’s Council Club Family Hotel in the images above, can be seen just to the left of the parked motorbike in the Google image below.

In 1878 the Sands & McDougall’s listing for 140 (later 260) Queen Street (see chart at bottom of page) was for an engineer and machinist ‘Gustav Muller’ (note the spelling; Müller had either dropped the diaeresis above the u or Sands & McDougall’s couldn’t typeset it properly!) However, in the 1880 edition the listing was changed to ‘Muller & Goetz engineers & machinists’.

When Gustav Müller became insolvent in 1882, Gottlob Wilhelm Goetz (Anglicized to William G. Goetz) testified at the hearing that he and Müller had operated a partnership from September 1878 to the 20th of April 1880; dates not reflected in the Sands & McDougall’s listings.

If the official Goetz foundation year of 1875 is correct (for which there is no evidence), perhaps W. G. Goetz had been working at another location until 1878, either by himself or with Müller.

Nothing is known for sure about how Müller and Goetz first met and came to work with one another. Perhaps they had known one another back in Germany. Giving scant support to that theory is that one of W. G. Goetz’s sisters, Beate Wilhemine Caroline was married to a Carl George Mueller. Despite the variation of the spelling of Müller, Muller and Mueller in various documents, could this actually be the same family?

Gustav Müller was declared insolvent on the 16th November 1880 (under the spelling Mueller), as recorded on p.2820 of the 19th November edition 131 of the Government Gazette. By the 1884 Sands & McDougall’s Melbourne Directory edition, Müller’s name was gone and the listing was ‘Goetz William G. & Co. Engineers’. Despite this, Müller remained working for Goetz, serving as a foreman.

Gustav Müller died near the end of January 1935, aged 92. The following is a tribute to him (with another spelling as Mueller) placed in The Argus on Feb. 1st by one of W. G. Goetz’s sons Emil, who regarded Gustav as a friend, mentor and gentleman.

By the 1889 Sands edition, the Goetz works was listed under the new numbering system as 260 Queen Street (east side, between Lonsdale and Little Lonsdale Streets), with Gottlob’s private residence listed at 31 Nicholson Street Abbotsford.

Goetz engineering remained at 260 Queen Street until moving to West Melbourne sometime between 1892 and 1895. 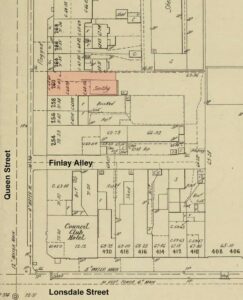 The 1915 Sands & McDougall’s directory shows the following regarding Goetz and their neighbours: