It seems that W. G. Goetz had a few disagreements with government institutions, including that of the Post Office Scandal where he was accused of inflating prices for supplying items to the post office and bribing a senior post office engineering employee.

In the letter below he sent to The Age (10th May 1880), Goetz defends his position regarding a tender he made to the Treasury Board. (See below for transcript and the Argus Tender advertisement.) 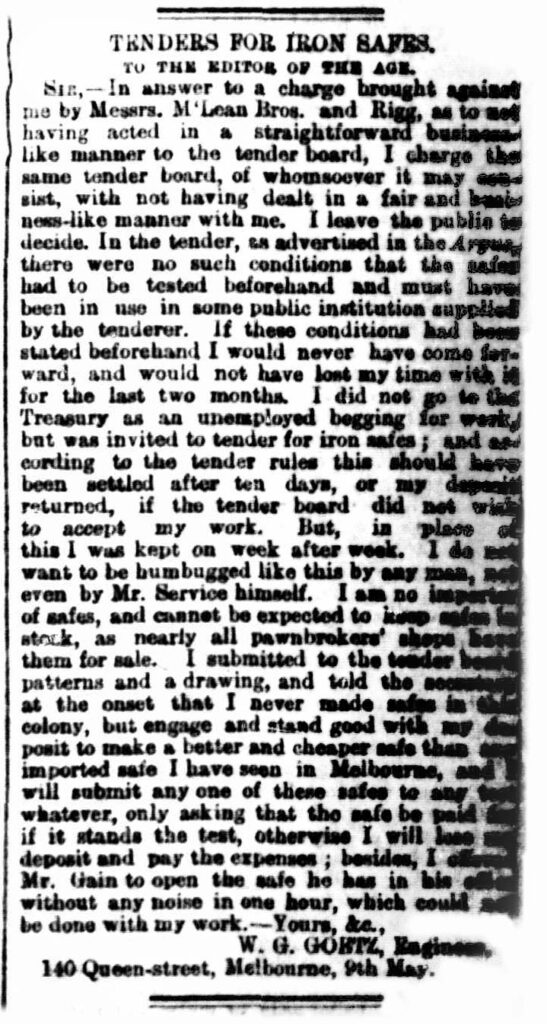 TENDERS FOR IRON SAFES.
TO THE EDITOR OF THE AGE.
Sir, — In answer to a charge brought against me by Messrs. M’Lean Bros. and Rigg, as to not having acted in a straightforward business like manner to the tender board, I charge the same tender board, of whomsoever it may consist, with not having dealt in a fair and business-like manner with me. I leave the public to decide. In the tender, as advertised in the Argus, there were no such conditions that the safes had to be tested beforehand and must have been in use in some public institution supplied by the tenderer. If these conditions had been stated beforehand I would never have come forward, and would not have lost my time with it for the last two months. I did not go to the Treasury as an unemployed begging for work but was invited to tender for iron safes ; and according to the tender rules this should have been settled after ten days, or my deposit returned, if the tender board did not want to accept my work. But, in place of this I was kept on week after week. I do not want to be humbugged like this by any man, not even by Mr. Service himself. I am no importer of safes, and cannot be expected to keep safes in stock, as nearly all pawnbrokers shops have them for sale. I submitted to the tender board patterns and a drawing, and told the secretary at the onset that I never made safes in the colony, but engage and stand good with my deposit to make a better and cheaper safe than any imported safe I lave seen in Melbourne, and I will submit any one of these safes to any test whatever, only asking that the safe be paid for if it stands the test, otherwise I will lose my deposit and pay the expense ; besides, I challenged Mr. Gain to open the safe he has in his office without any noise in one hour, which could not be done with my work. — Yours, &a,
W. G. Goetz, Engineer.
140 Queen-street, Melbourne, 9th May.

Below: Possibly the Tender advertisement Goetz’s letter was referring to, from The Argus, 6th March, 1880. See Schedule item 7: Ironmongery, fireproof safes, &c. For security, 10% deposit was required when tendering.

Unsuccessful tenderers were supposed to have their deposit returned within 10 days, but it seems that after 2 months, Goetz’s tender was undecided and his £30 deposit had not been returned. It seems that from his letter and other reports of the Post Office Scandal, that he was not fond of bureaucrats! Who is? 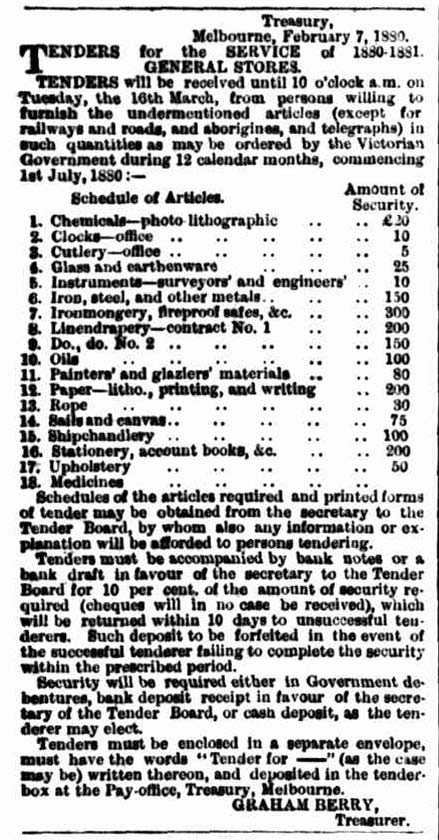