Goetz employees were given a memento of their first five years service in the form of a set of six square metallic coasters, each 95mm x 95mm.

The coasters shown below were given to Terence Linehan, who worked at Goetz as an engineering pattern maker from 1969 to 1982.

The coasters were “Designed and Crafted” by Paul Stephen-Daly, trading as Louchrilau Nominees P/L of Malvern. The company was known for producing limited edition and custom metallic drink coasters, including a souvenir drink coaster to help publicise the Phar Lap movie in 1983. An example is held at Museum Victoria as part of the Phar Lap collection.

The company received various government export and expansion grants during the 1970s and 1980s, however, according to Commonwealth of Australia Gazette, Business (National : 1987 – 2004), the company was deregistered and dissolved as of 4th August 1990.

Thanks to Terence’s daughter Robyn for the coasters. Click images below for larger views 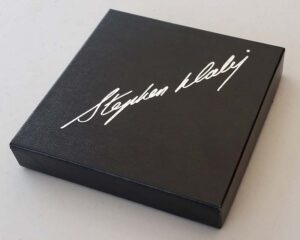