Albert Goetz (21 Dec 1884 – 27 Dec 1952) was the second youngest son of Wilhelm Gottlob and Sarag Goetz. Along with younger brother Otto, Albert was a director at W. G. Goetz and Goetz’s Hall Street Spotswood neighbour, RVB Engineering, until (or close to) the year of his death. In July 1953, Peter Moss was appointed as a director to fill the vacancy left by the death of Albert, and Otto was appointed Chairman of Directors.

Below: This photo of Albert Goetz appeared in newspapers in 1940, when he was 56 year old, but looks like it may be an earlier photo. It was used as a file photo until 1950. 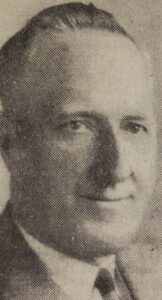 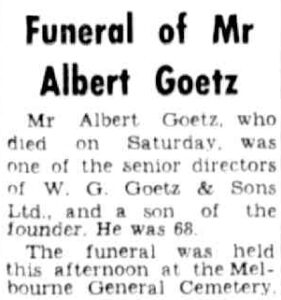