The Need for a Foundry

In 1948, owing to the increasing difficulty of obtaining castings for the machinery being manufactured and for the new types contemplated, W. G. Goetz acquired an interest in a small foundry at 7 Pickett Street, Dandenong (see advert below). Between registering the name in 1938 and becoming involved in the Pickett Street foundry, founding work may have been undertaken at Goetz’s Hall Street, Spotswood site, although no evidence of this has come to light.

Above: Pickett Street, Dandenong. Hugh Murray & Son. Agricultural harrows manufacturer, moved to Dandenong in 1915 (from Buln Buln). Nowadays the factories in the photo occupy from No. 1 to No. 17 Pickett Street. It seems that Eastern Metallurgical Founders may have shared the foundry with Hugh Murray & Son, perhaps in the buildings pictured. Hugh Murray Agricultural Equipment still occupy the buildings today.
1960 photo, http://olddandenong.blogspot.com 1060s

However in 1949, the owners of the Pickett Street property ‘commenced proceedings for ejectment’, and in view of this the company purchased land in Grace Street (Cheltenham Road), Dandenong and commenced the building of their own foundry.

Below: It seems that the Pickett Street site had problems with complaints of of dust and tar nuisance. The Dandenong Journal, 23 February 1949, p.7 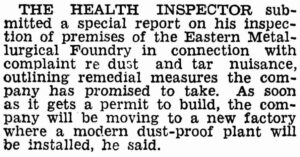 Below: Grim news about the death of a worker at the Pickett Street foundry.
The Dandenong Journal, 8 August 1951, p.1 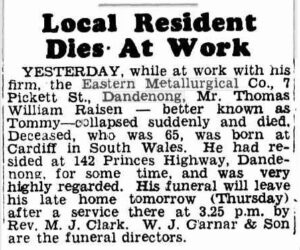 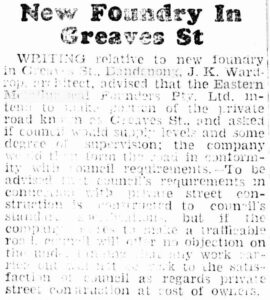 Above: This faded article from The Dandenong Journal, 29 March 1950, p. 16 reads “Writing relative to new foundry in Greaves St., Dandenong, J. K. Wardrop, architect, advised that the Eastern Metallurgical Founders Pty. Ltd. intend to make portion of the private road known as Greaves St., and asked if council would supply levels and some degree of supervision; the company would then form the road in conformity with council requirements. – To be advised that council’s requirements in connection with private street construction is constructed to council’s standard specifications, but if the company desires to make a trafficable road, council will offer no objection on the understanding that any work carried out will not be work to the satisfaction of  council as regards private street construction at cost of owners.”

The site was on the corner of Grace street (Cheltenham Road) and Greaves Street (now Carroll Lane), opposite what was the Dandenong Saleyards (1958 – 1998). The site is currently occupied by a Coles Express Shell service station. 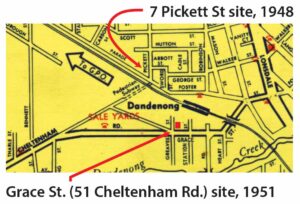 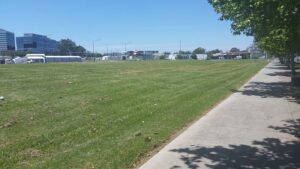 Above: View eastward alongside Cheltenham Road, November 2020. The grass area is where the Dandenong Saleyards was located until 1998; the distant Shell service station on the corner of Cheltenham Road and Carroll Lane occupies the site where Eastern Metallurgical Founders was located. Unfortunately, no old photographs showing the foundry have been discovered.
Click image for larger view.

Below: A letter from Eastern Metallurgical Founders to the National Australia Bank, Dandenong, dated 11th April 1967. The letterhead is old stationery stock, still showing the foundry’s Grace Street address, rather than Cheltenham Road. The registered address is Goetz’s Hall Street Spotswood premises. The letter is signed by Chairman and Managing Director Otto Goetz and three other directors. Click image for larger view. 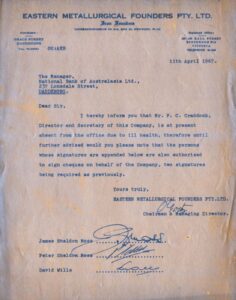 Raising Funds for a New Foundry

During a 1951 shareholders meeting, W. G. Goetz directors asked shareholders present to subscribe to an issue of £35,000 in Cumulative Shares commencing on 6th April that year, to raise funds to complete the construction of the Grace Street (Cheltenham Road) foundry and to ensure supply of raw materials. 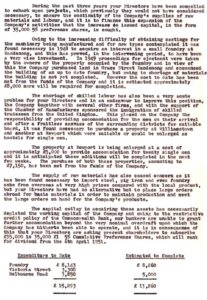 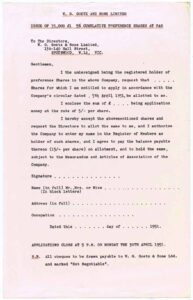 Below: Notices of Consent for the share issue from the Commonwealth of Australia, 19 January, 1951. Click image for larger view. 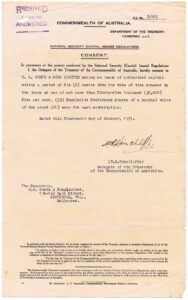 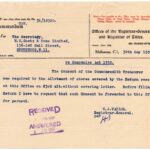 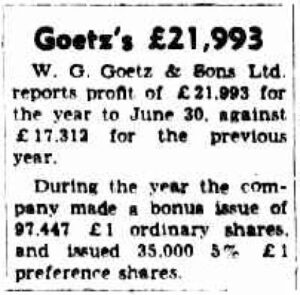 Below: Apparently the Dandenong West Progress Association were unimpressed with sealing of some local roads and emissions from an Eastern Metallurgical furnace chimney and “the burning of a tar mixture for coating cast pipes, on the easement at the rear of these premises.” Dandenong Journal, 15 December 1948, p.8 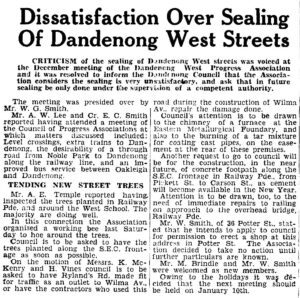 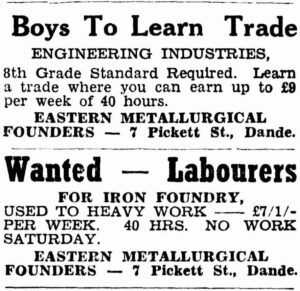 Below: Another ad for labourers, this time at the Grace Street foundry.
The Dandenong Journal, 30 June 1954, p.3 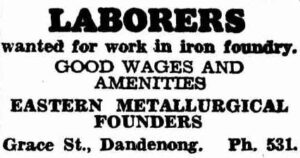 Below: The Boy Scouts Association 7th Australian Jamboree was in full swing at ‘Challenge Valley’ in the Dandenong Police Paddocks Reserve from 31 December 1964 – 10 January 1965. The Jamboree had its own newspaper, ‘Jamboree Daily’, published by David Syme & Co., publishers of The Age newspaper. Eastern Metallurgical contributed sponsorship as an advertiser, along with a host of other local businesses. Jamboree Daily, January 1965, p.7 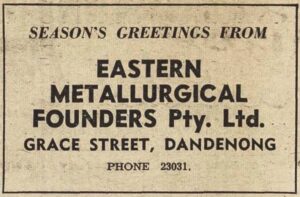 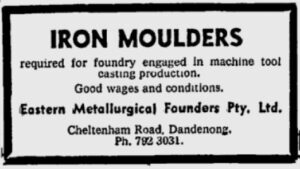 Below: Letterhead from a letter to the Lonsdale Street Dandenong branch of the National Bank of Australia, dated 11th April 1967. Note the address ‘Grace Street, Dandenong’. According to street directories of the time, the portion of Cheltenham Road known as Grace street was renamed as Cheltenham Road sometime around 1966. From then onwards, the foundary’s address was 51 Cheltenham Road (see map near top of this article).

Below: An advertisement in the Dandenong Lions Club Recipe Book, 1971 or ’72.

Eastern Metallurgical Founders cast a number of keels for ocean-going racing yachts involved in the Sydney to Hobart races. In 1995, the company cast the keel for the replica tall ship Enterprise, the original of which brought first settlers to what would become Melbourne in 1835. For a full article in the 28 January 2009 Berwick Gazette about Eastern Metallurgical Founders involvement in the project under the management of Bob Street, click this link.